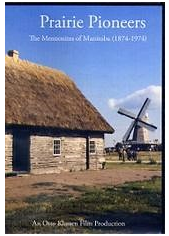 Prairie Pioneers discusses the lives of the Russian-Mennonites who settled in Manitoba in 1874. The film was produced and edited by Otto Klassen in cooperation with the Mennonite Historical Society in 2008. The run time is 43 minutes with narration by Al Reimer. This film begins by discussing the ways that the Mennonites adapted to conditions of an unfamiliar land. Reimer tells of the many aspects of life in Manitoba including types of construction, machinery, and transportation, while video footage is organized to provide visual examples.

Women’s roles in the communities are described along with their common types of work. The children’s chores are noted also. The men and boys’ work often took place in the fields. Some of these processes are explained in steps, such as the growing and harvesting of grain. Winter demanded alternative work for the Manitoba community, as it was too cold to continue farming in the same way that they had during other seasons. This information is thoroughly examined, including their types of dress and methods to keep warm during cold months.

It is acknowledged that the Mennonites made significant progress within early years of settling in their new homeland. Some of the accomplishments by these groups included sturdier homes to replace their initial structures, as well as churches, high schools, colleges and hospitals. As the vast majority of the Mennonite population settled in Manitoba and Winnipeg, the Mennonites played significant roles in the events that occurred throughout the years in these areas, such as the Manitoba Centennial in 1970. Footage of this event is included and discussed.

From this point in the film, Reimer explains many of the large events and celebrations that the Mennonites had a hand in. For example, scenes of parades are shown from the Altona Sunflower Festival. There are additional scenes of choirs, concerts, and the Mennonite Festival of Art and Music, along with information on some of the known Mennonite artists during that time.

Another focal point of the film looks at the Mennonite Village Museum in Steinbach and many of its events and activities that were held there. This includes footage of re-enactments that occurred on site, as well as imagery of the buildings that were modelled after authentic homes, house barns, and a windmill. The latter is noted to be the most significant of the buildings at the museum for reasons which are also defined. The process of building the windmill is described as well. Another of the various events in this film is Pioneer day which took place at the Museum, and related activities are demonstrated.

The footage of scenery, farm and wildlife included in the film gives viewers a good sense of the spotlighted province. The tone of the film is mainly that of a lighter one, as it focuses on the successes of the Mennonites once they were able to escape prior hardship. There is one scene which involves hog slaughtering, with some of this shown (which may be disturbing to some). The film is otherwise considered to be family friendly, yet because of the previously noted, viewer discretion is advised.
-Teanna Rozek
2018-08-24