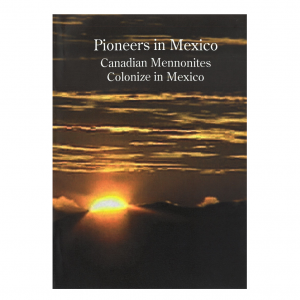 Pioneers in Mexico was directed, edited and produced by Otto Klassen. This documentary explains the history of the Mennonites who emigrated from Canada to Mexico in the years 1922-26. The film narrows in on the work that men and women did to establish a successful community in a vastly different land than they were previously accustomed to. Klassen utilizes video and old photos from the Mennonite Historical Society of Mexico along with other sources such as Heinz Berger and George K. Epp to give viewers a clear idea of the facts presented. With narration by George Rempel Jr., this film is great for those interested in history related to agriculture, and provides information on various types of farming from the past. The film runs at 54 minutes and the content is appropriate for all ages. (Please note there is one scene containing hog butchering, however this is not elaborate).

The film discusses the items and livestock brought over from Canada, processes and struggles of adapting to a new climate, and explanations of each type of field work (i.e. growing corn or processing dairy). Time is also given to describe their faith and worship services. One of the main issues that caused great difficulty in their settling was the tough soil which their earliest machinery could not handle. This led to new mechanization and evolution of farm equipment to better suit Mexico’s conditions.

As the film continues, there is information on building styles of the villages, and comparing past to present with the schools, churches, homes, and machinery. Reasons for emigration are discussed, as is Mexico’s weather conditions and how this affected the Mennonite farmers in their day-to-day tasks. The narrator describes all kinds of work that these Mennonites underwent including planting, irrigating and fertilizing, growing, harvesting, and marketing. This also looks further into feed mills and processes, raising cattle, varying seasons and affects, the highs and lows of the economy of such areas, and the transportation of goods/products. Other details include information on the factories, foundries, entrepreneurialism, employment and ownership.