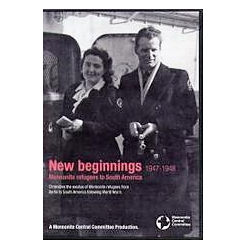 The film New Beginnings (1947- 1948 Mennonite Refugees to South America), is a Mennonite Central Committee production from 1988, with a run time totaling 121 minutes. The first part- Berlin Exodus, is the longest running of the three, being 56 minutes, and acts as an introduction to the story of Mennonite refugees and their experiences throughout 1947 and 1948. Peter Dyck gives a succinct history lesson from personal experience, while using a chalkboard to illustrate as if teaching in a class room. This segment discusses MCC relief workers, the Mennonite camps in Berlin, their flight from Russia, and more. Dyck explains what it was like to work for the MCC, and how the Mennonites reacted to MCC’s accommodation and efforts. He also talks about his experiences in being responsible for a large number of people and how he dealt with issues regarding this while being a part of the relief program and at the same time, answering to the military.

Furthermore, Dyck goes into detail about C.F. Klassen who was an “…active lay worker in the Mennonite Brethren (MB) Church of Canada after 1928 and an outstanding leader and administrator in Mennonite relief and colonization work in Russia, Canada”. (gameo) He also discusses the process of finding a location to send the refugees, so that they could have a safe place to settle. Other content of part one looks at Mennonite faith and the miracles that they prayed for in such uncertainties, as well as the prayers that were answered. Further information includes the Queen of Holland and her ship which was offered to help Mennonites with their travels, and elaborates on incidents of the US and Russian forces clashing in related situations.

Part two of the film titled Gott Kann (God Can) stars Peter and Elfrieda Dyck in a living room setting with many young and old gathered for a story-time of sorts, as an introduction. Peter Dyck starts by giving a brief explanation of the MCC logo, with some Q&A with the small group. This part covers more about C.F. Klassen and his work/position as well as his encouragement with an emphasis on the phrase “Gott Kann”. Some of the second part contains narration involving descriptions of Germany’s conditions, with old film footage from the years in focus. The narration has a slightly theatrical approach, making the topic seem lighter than that of a serious documentary-style commentary, yet this does not undermine the challenges and harsh conditions faced by those included in the story. Part two runs at 32 minutes.

Part three, New Beginnings (33 minutes), involves another story by Peter and Elfrieda Dyck, which describes their travels from Europe to South America as a continuation of prior parts. The main topic of this third bit shows what happens to the refugees after they arrive in their new homeland, Paraguay. This begins again with a similar introduction: story time with a small group, Peter and Elfrieda. Discussion of costs to transport the refugees, the Menno Pass document, post-war conditions, refugee camps, bible distribution, the IRO (International Refugee Organization), transportation, colonies in Paraguay and more are all included. Maps allow for a clear understanding of specific areas in congruence with the story, and authentic footage creates a well-rounded historical film. The hard work that the Mennonites underwent to build houses and make use of their new land is shown in the video, as the narration continues to interpret what is seen. This concludes with a visual comparison of Paraguay when the refugees first arrived and the same area 25 years later, demonstrating their work and progress in transforming an unfamiliar place into a home. There is nothing in this film that is visually disturbing, and may be easily watched by families together.
-Teanna Rozek
2018-08-14