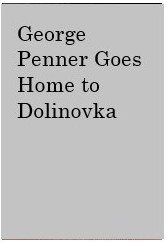 This film was (seemingly) produced by George Penner’s son, Richard. The run time is 90 minutes, and consists mostly of home video recordings from 1988. The film documents a trip back to where George was born in the foothills near Orenburg, as well as Germany, and Moscow. This is explained with a map by Richard in the introduction. At the start, scenery of Alberta is displayed, followed by a visit with George in his Alberta home. This is where the trip began.

In order to discuss the family’s history and culture, there is information provided on Menno Simons and Mennonites, along with further points on their immigration. Catharine the Great is spoken about also. A slideshow of captioned images include features such as painting by J.P. Klassen, photos of the Dyck flour mill in Rosenthal, and Lepp & Wallmann factories. Further historical information covers the Bolshevik revolution in 1917 and its impacts, which includes looking specifically at how this affected the Penner family.

Viewers get a glimpse of scenes from the Frankfurt airport, the Molotschna colony, and other significant areas of George’s past. As the journey unfolds, so do the long lasting memories of George’s former life in the areas visited. These memories are re-lived by viewing old schools, churches, villages, and homes, (at times over traditional Mennonite meals). Conversations are held between family members, friends, and George. Some of this is in Low German, while only a portion of this is translated with subtitles. There is also some narration (in English) by R. Penner. The style of the film is casual, and not likely scripted. The viewer becomes a part of this experience in an honest and true way.

Other details of the film include visits to the general store in #9 village, Kobanka, which is the village that George grew up in. Much of the purpose for the trip and film seems to be for sentimental reasons. From the ice hockey rink in the #11 village, to the dairies and pig barns, there are a multitude of stories that are brought forth through the communities involved. This film is suitable for all ages.

-Please note: being that this is a low-budget film, some of the video contains small glitches such as shaky images.