You are invited! Join us for the opening reception for our next Gallery Exhibit entitled: Mennonite Gals Can Paint: Watercolour & Acrylic Paintings
Everyone is invited to this free event and light refreshments will be provided.
Meet the artists and hear them talk about their work.
Doors at 1pm, Presentation at 2pm.
Main Exhibit will also be open.
Bring friends and relatives.

Scroll down for more information: 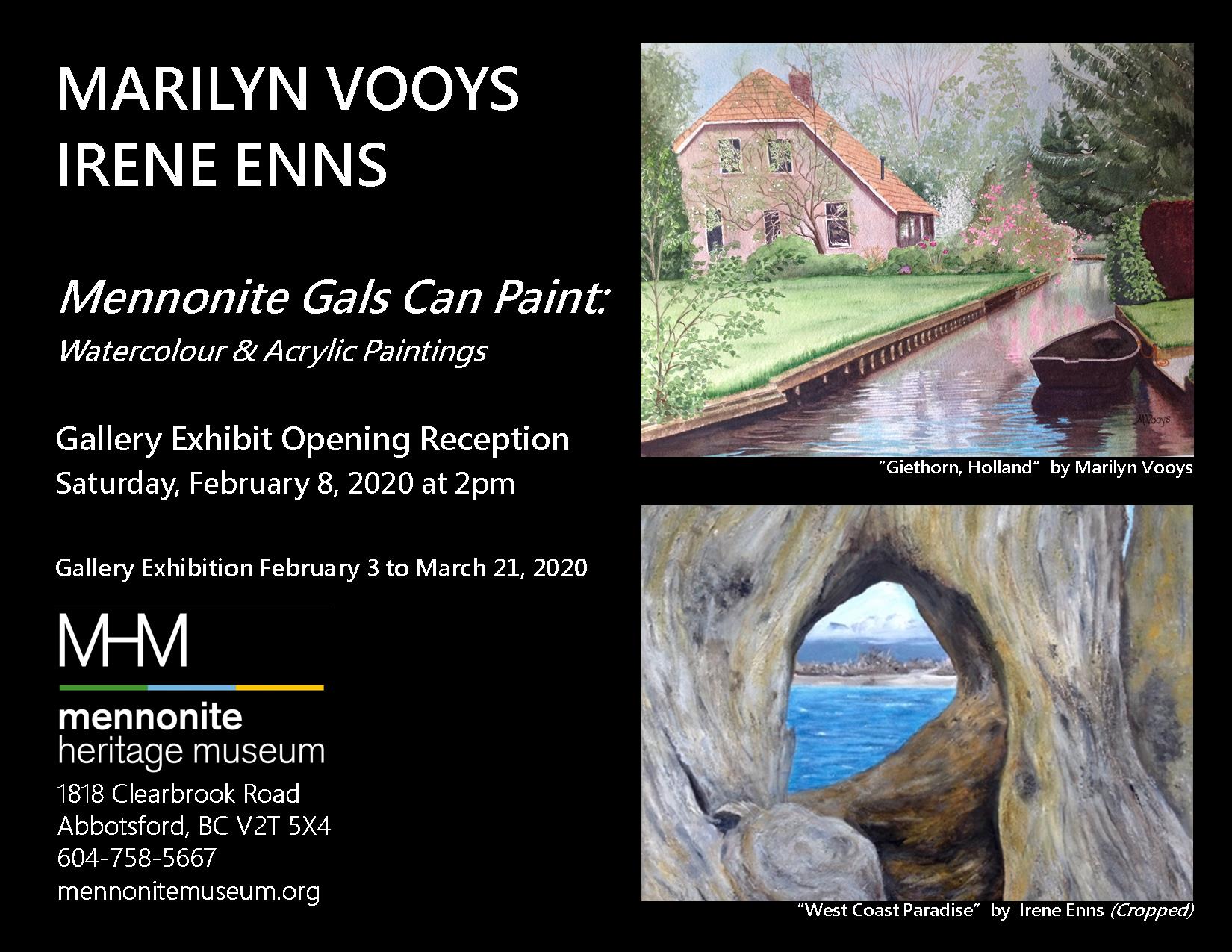 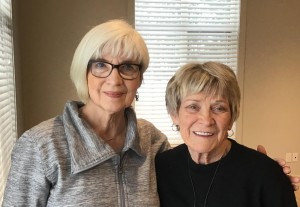 Marilyn Vooys is a watercolour artist who chose this medium because of the variety of effects that can be created with it, from pastel softness to bold strong colour. As well, it is a ‘clean’ medium that doesn’t take days to dry. She uses photos from her own travels as reference and takes workshops to expand her base of knowledge & she also frames her own art. A member of the Fraser Valley Watermedia Society (FVWS) since 1996, she has had her work displayed mainly in the Fraser Valley. You may have seen her work displayed at the Clearbrook Library, Kariton Gallery, Plas des Arts, Maple Ridge and Mission Arts Centre.

Irene Enns, a member of the Fraser Valley Watermedia Society, Abbotsford Arts Council, Central Fraser Valley Graphic Guild, and past member of the Federation of Canadian Artists and Mission Arts Council has actively exhibited her watercolor and acrylic paintings in corporate and public institutions and in joint and group exhibitions in Canada and the United States. Numerous paintings have also been donated to charitable causes.

Canadian born, educated, and a long-time resident of Abbotsford, British Columbia, she is passionate about capturing scenes from her native land-having a strong focus on B.C. landscapes and from the experiences garnered during her extensive travels. A melting pot and an avenue for creative painting, Irene also developed her own “Sepia Washout” technique as she studied under Elsie Grace, who was inducted into the College of the Desert Hall of Fame. Under the tutelage of Jack Rowe, a Signature Member of Watercolor West, and a Member of the National Academy of Design, she continued her pursuit of and studies in painting from 2000 to 2004.  Irene has won six prestigious art awards including the Artist of the Year Award, Abbotsford Arts Council in 2011 and the Artists’ Choice Award, Fraser Valley Watermedia Society in 2017.

As a painter, it is an opportunity to gently nudge awareness of images and expressions of the soul to others, and as a guest artist, Irene also demonstrates her skills traveling through visual concepts, personal experiences, and transferring onto paper and canvas the emotions of the heart – gift to share with others. 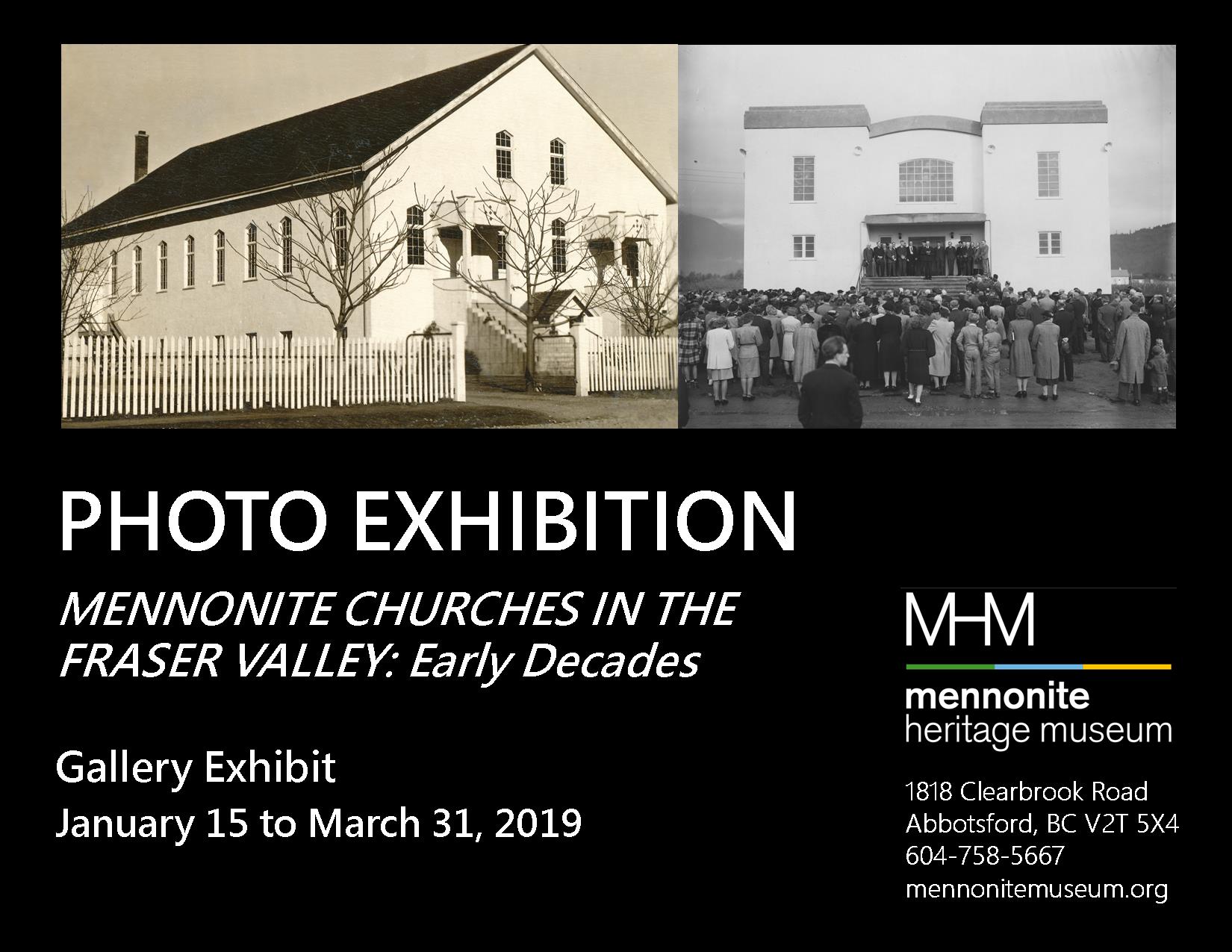 Mennonite Churches in the Fraser Valley:
The Early Decades

The Church played a central role in the lives of Mennonites in the Fraser Valley. As soon as Mennonite families arrived in the area, they began gathering in homes and schools for worship. In spite of the Great Depression of the 1930s, Mennonite families sacrificed financially so that they could build places of worship and Christian education.

Mennonite churches were functional buildings built of wood. Unlike the churches of other Christian groups, Mennonite churches were plain and unadorned with stained glass, carved pulpits, and bell towers. Buildings were modified, expanded, and replaced when necessary to accommodate continued growth, and daughter congregations were established to allow for families in close proximity to each other to worship together without the need for traveling long distances.

Only a few of the original buildings remain, and of those that do, other Christian groups now worship in some of them. The images in this exhibit illustrate the simple faith of the early Mennonite settlers and the sacrifices they made to preserve and pass on their faith to the next generations.

The photo exhibit focuses on the Yarrow, Greendale, Abbotsford, and Chilliwack areas and on congregations established throughout the late 1920s, the 1930s, and the 1940s.