To celebrate Culture Days 2021, the Mennonite Heritage Museum is pleased to host a free movie matinee by Refuge 31 Films of the 2020 documentary Volendam A Refugee Story! Matinees will be running weekdays at 1pm from Oct 12 – 22. Theatre seating is limited, and registration is required. Call 604-758-5667 on weekdays from 10am to 3pm to RSVP.
Interested in watching from home? Click the link below to rent it online and support Refuge 31 films!
http://vimeo.click-social-card.top/zgrbtbz 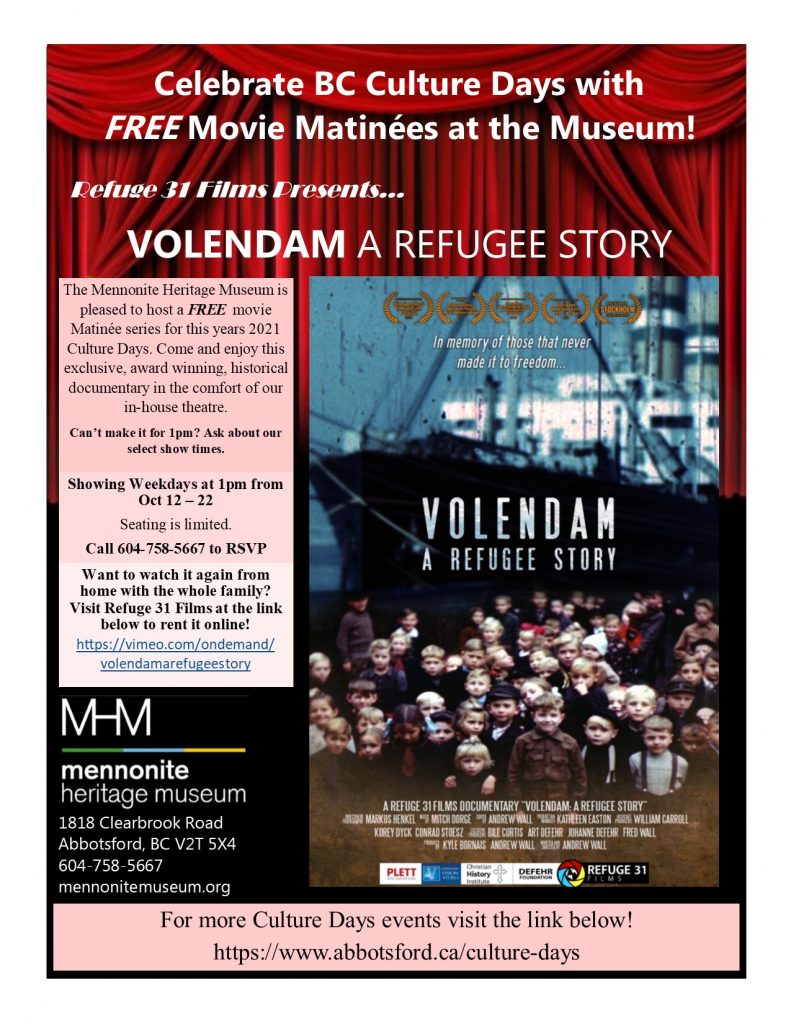 Pioneers in the Chaco

Mennonites living in Manitoba, having emigrated as early as the 1870s had been granted freedom to practice their Anabaptist faith. Some of these freedoms were lost when the Government legislated that all public school instruction would be in the English language (1919). Several Mennonites travelled to Paraguay, South America in 1921 in order to explore the possibility of having their people emigrate to Paraguay. In November 1926 the first group left Canada for Paraguay where their freedoms in language, education, religion and non-resistance were granted.

The beginnings were very difficult. The Jesuits had earlier abandoned the area because

of the harsh environmental conditions and the resistance of the native tribes (eg. Lenguas).

hell hole’. Hot temperatures, poisonous snakes, a lack of building materials and cultivated land, as well reconciling with the Lenguas, made for a difficult beginning. Many died due to disease. Of the remaining immigrants approximately 20% returned to Canada and the rest stayed and dealt

with the harsh conditions.

Oxen, which needed to be domesticated, were the sole mode for transportation and hauling supplies.

Some died from exhaustion when forced to pull their loaded wagons over tall grass, watery lands and roadless fields. Eventually horses replaced the oxen and still later, machines were brought in, including tractors.

Housing was another issue. Initially homes were built with sod walls and thatched roofs. Later bricks (sun-baked in Paraguay’s heat) and lumber.

The Mennonites befriended the Lenguas with gifts , and began employing them.

Finding appropriate crops was another issue. Slowly they learned what would grow well and what would not. Peanuts and cotton became important crops for food and export. Ranching developed over time with the export of dairy products and beef. The local bottle tree was hollowed out to form watering troughs for their animals.

In 1930 and again in 1947 (after WW II) more Mennonites came to Paraguay from Europe/Russia.

Otto Klassen, who had lived in the Paraguayan Chaco before moving to Manitoba,

Canada, returned to Paraguay to film and produce this video in 2009.