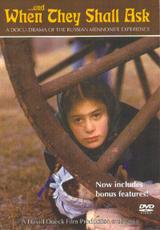 And When They Shall Ask is a film directed by John Morrow, and produced by David Dueck from Winnipeg. Dueck is the director of a nonprofit organization called Mennonite Media Society, which produces Mennonite films. Dueck also taught University and has won multiple awards for his films. The run time of this particular video is 88 minutes and covers history on Mennonites and their experience of Russia from 1788 to present. Throughout the film there are various layers which fully describe each turn of events. This is achieved through a compilation of film footage, old photographs and illustrations, interviews of witnesses, re-enacted scenes and narration. During the film, there is some conversation spoken in the German language. This is not translated for the English viewer. However, the narration which delivers the bulk of the information is in English.

To start off, a brief history of the Mennonite faith such as the first Mennonite Anabaptists, Menno Simons, and their beliefs is provided. One of the several featured interviewees contributes to this with their knowledge of what it means to be a true Mennonite. Following this, Dueck’s film gives detailed information on various events as the Mennonites endured hardship and turmoil under the ruling of Lenin and Stalin, through WWI, WWII, the civil war, and attacks of Machno. Furthermore, the viewer is informed of the harsh realities of Russian invasions, separation of families, travelling through the red gate, the secret police, exile, famine and more. Other aspects on a lighter note are touched on such as the earlier “golden years” of Russia for the Mennonites, prior to such difficult times.

As much of the content is quite heavy, there are moments of the film that may be disturbing for some, such as bombing, shootings, presumed dead bodies, and brief moments of abrupt violent attacks. There are also short discussions of how some were tormented, including sexual abuse. Families may want to keep this in mind when considering this film.

Over all, the film contains a great deal of information on these particular events, and is yet another helpful building block to further understanding Mennonites and their significant history.

“And When They Shall Ask”. David Dueck Film Production. Mennonite Media Society. 2010.